28 February 2017 South Africa: lots of grains and oilseeds on the horizon

28 February 2017 South Africa: lots of grains and oilseeds on the horizon

South Africa could potentially harvest a bumper crop in the 2016/17 production season. This comes after the National Crop Estimate Committee’s first production estimates for summer crops reached 16.21 million tonnes, up by 72% from the previous season*. Moreover, this could be the largest crop since the 2013/14 production season.

Moreover, soybean production is estimated at 1 070 495 tonnes, which is 44% higher than the previous season, also driven by an increase in area plantings, as well as higher expected yields. Sunflower seed production is forecast at 928 620 tonnes, which is a 23% annual increase (despite the drop in area, which has been compensated by higher yields). Following a historic decline in the previous season, groundnuts production is set to increase by three-fold from last season’s crop to 88 175 tonnes. This is also driven by an uptick in area plantings, as well as expected higher yields.

Also worth noting is that South Africa’s final wheat production estimate was revised up by 1% from the previous estimate to 1.90 million tonnes due to higher yields on the back of favourable weather conditions. More importantly, this is 32% higher than the previous season’s crop of 1.44 million tonnes. Subsequently, wheat imports for this season could decline by 25% from 2015/16 marketing year to 1.5 million tonnes.

Although this is an encouraging picture, it is important to note that these are first estimates for the season, we will get a much clearer view of the crop over the coming months. With that said, recent indications suggest that the crop is in fairly good condition throughout the country. The next two weeks could present dry weather, with scattered showers and that should offer a “breathing gap” after weeks of high rainfall. 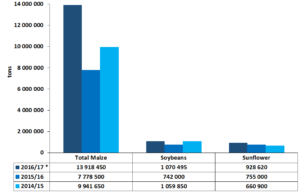