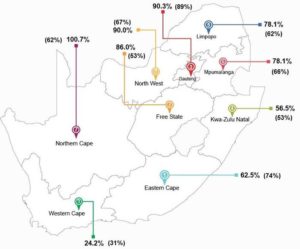 Source: Department of Water and Sanitation and Agbiz Research.

South African farmers continue to deliver the maize crop to commercial silos under the 2016/17 marketing year. In the week ending 31 March 2017, total maize producer deliveries were recorded at 83 540 tonnes (70% was white maize and 30% was yellow maize). This is 9% higher than the volume delivered the previous week.  The total maize producer deliveries for “week 1 to 48” currently stand at 6.95 million tonnes.

Weather forecasts show a possibility of widespread showers across the country within the next two weeks. This will benefit the areas that planted late, particularly around the North West province. Moreover, dam levels could also see improvement and benefit the irrigation areas over the coming months.

With South Africa set to be a net exporter of maize this year, therefore, it is worth observing the developments in the region as that could possibly present market opportunities or competition. Overall, crops are in a fair condition across Southern Africa, but some countries will likely remain net importers of maize – presenting an opportunity for South Africa. Worth highlighting is Zambia, the second largest maize producer in the region, conditions are favourable for the maize crop. Concern remains in the northern parts of the country due to the Fall Armyworm outbreaks. Roughly 20% of the country was affected by this pest but control operations were able to mitigate the severity of the impact.

The weather forecasts currently show a possibility of rainfall within the next two weeks. This will be beneficial for winter wheat growing areas, with plantings activity set to start within the next few weeks. In addition, the South African Weather Services suggests that there is a likelihood of above-normal rainfall around late autumn to mid-winter (June-July-August), which will be positive for the new season crop .

The forecast rainfall will also improve the dam levels that are critically low. Data from the department of Water and Sanitation shows that in the week that ended on 03 April 2016, the Western Cape average dam levels were at 24% full, which is 7% lower than the corresponding period last year.

South African farmers continue to deliver wheat to commercial silos. In the week ending 31 March 2017, wheat deliveries were recorded at 4 491 tonnes, which is 14% higher than the volume recorded the previous week. This brought South Africa’s 2016/17 total wheat deliveries for “week 1 to 26” to 1.83 million tonnes.

In global markets – this morning Chicago soybean price was down by 0.42% from the level seen at midday yesterday due to expected large supplies.

With that said, there are rising fears that wet weather conditions in Argentina could potentially cause crop dame. The weather forecast currently shows a possibility of heavy showers within the next eight days, estimated at a range between 35 and 70 millimetres. At the moment, the International Grains Council forecasts country’s 2016/17 soybean crop at 56 million tonnes, which is 5% lower than the previous season. With that said, some analysts such as Informa Economics are a bit optimistic on Argentina’s crop (see our morning note from yesterday).

While there’s optimism around crop production, the expected showers in some parts of Brazil within the next eight days could cause harvest delays. On the fifth of April 2017, Brazilian farmers had harvested 81% of their soybean crop, ahead of the corresponding period last year.

Worth noting is that although the National Crop Estimate Committee revised down its sunflower seed production forecast by 4% from the previous estimate to 896 060 tonnes, this is still 19% higher than the previous season’s crop.  Moreover, crop conditions remain fairly positive, with the exception of certain areas in the western parts of the North West province which still needs rainfall.

In global markets – the EU’s sunflower seed market saw a quiet session, with prices unchanged from the previous day, closing at US$394 per tonne. With that said, there is generally a bearish sentiment in the market which emanates from expectations of large supplies.

The South African potatoes market lost 3.75% during yesterday’s trade session owing to a recovery in stock levels, with the price closing at R25.16 per kilogramme (10 kg bag).