South Africa’s logistics amongst the best in the world 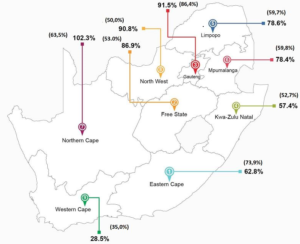 South African farmers continue to deliver wheat to commercial silos. In the week ending 10 March 2017, wheat deliveries were recorded at 7 729 tonnes, which is 88% higher than the volume recorded the previous week. This brought South Africa’s 2016/17 total wheat deliveries for “week 1 to 23” to 1.81 million tonnes.

Weather forecast for the domestic winter wheat growing areas remains dry and warm. For the Western Cape province, this is evident from the recent dam levels data, which are currently at critically low levels. In the week ending 13 March 2016, the Western Cape average dam levels were at 29% full, which is 6% lower than the corresponding period last year.

While the difference from the previous year is not alarming, the weather outlook for this month shows a possibility of persistent dryness, which will further reduce the water supplies. Moreover, forecasters are predicting a possibility of another drought in the second quarter of this year . If that materialises, the next season’s wheat crop could be negatively affected. We will monitor the developments as the season progresses.

Of minimal influence to the market, but interesting are developments in Rwanda, where the Ministry of agriculture plans to increase the wheat plantings over the next two years by more than 70% from the current area to 95 000 hectares.

South African farmers continue to deliver maize crop to commercial silos under the 2016/17 marketing year. In the week ending 10 March 2017, total maize producer deliveries were recorded at 36 209 tonnes (71% was white maize and 29% was yellow maize). This is almost twice the volume delivered the previous week. South Africa’s total maize producer deliveries for “week 1 to 45” currently stand at 6.71 million tonnes.

On the global front – this morning Chicago maize price was up by 0.27% from the level seen at midday yesterday, owing to the weaker US Dollar against major currencies, as well as firm global demand. China recently purchased 195 000 tonnes of US maize.

Looking ahead, Allendale Inc forecasts US 2017/18 maize plantings at 36.4 million hectares, which is 4% lower than the previous season, owing to stiff competition from soybeans (better profitability level).

There were no major events in the South African soybean market. From the weather perspective, the expected light showers in the eastern parts of the country will not have much impact on the crop as it is already maturing. Overall, soybean crop is generally in good shape across the country.

In global markets – this morning Chicago soybean price was down by 0.50% from the level seen at midday yesterday, owing to positive prospects for the South American soybean crop.

After the previous week’s logistical challenges in Brazil due to wet conditions, the warm weather has improved the situation significantly. There are no issues at the ports at the moment, therefore, exports could soon gain momentum. There are already reports that the vessel line-up in the ports could total 9.0 million tonnes.

Moreover, warm weather conditions are favourable for harvest processes. On the 14th March 2017, Brazil had harvested 62% of its soybean crop, ahead of the corresponding period last year. The USDA placed Brazil’s 2016/17 soybean production at 108 million tonnes, which is 12% higher than the previous season due to an uptick in area plantings, as well as higher yields due to favourable weather conditions.

The South African potatoes market lost ground during yesterday’s trade session, with the price down by 10.11% and closing at R26.86 per bag (10 kilogrammes). These losses came on the back of relatively large domestic supplies. At the start of yesterday’s trade session, the stocks were at 929 259 bags (10 kg bags), which is 14% higher than the previous day owing to ongoing harvest activity. Moreover, during the session, the market saw an additional increase in deliveries and that led to a 8% uptick in daily stocks to 1 006 637 bags (10 kg bags).