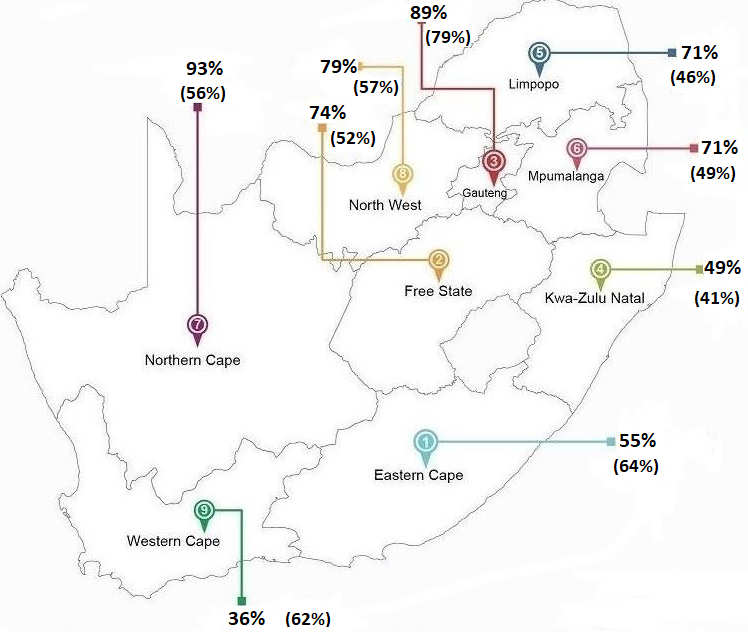 This week’s domestic maize calendar is fairly light with only weekly trade and deliveries data due for release. As a result, the weather will be a primary focus as the planting activity in the eastern regions progresses.

The weather prospects remain positive with a possibility of widespread rainfall of between 16 and 35 millimetres across the South African maize-belt within the next eight days. This might slow the planting activity, which will not be an issue as the optimal planting window in the eastern parts of the country is open until mid-November, and in the western areas until December.

In its World Agricultural Supply and Demand Estimates monthly report, the USDA estimated South Africa’s 2017/18 maize production at 12.5 million tonnes. This is roughly in line with the long-term production trend (discounting the drought years, 2015-16). Additionally, this is well above South Africa’s annual maize consumption of 10.5 million tonnes.

Although the winter wheat crop is in a fair condition in irrigation areas of the country, the dryland areas are not in good shape, especially the Swartland region of the Western Cape province. This is a result of continued dryness across the province.

The water levels in dams also resemble the current situation. The recent update for the week ending 09 October 2017 shows that dams averaged 36% in the Western Cape province, which is unchanged from the previous week, but 26-points lower than the corresponding period last year.

On the global front – This morning the Chicago wheat price was up by 1.86% from levels seen at midday Friday due to lingering concerns of dryness in Australia, as well as relatively lower production in the US.

The USDA forecasts the US 2017/18 wheat production at 47 million tonnes, which is 25% lower than the previous season’s harvest. In addition, this is almost in line with the International Grains Council estimate.

While the expected rainfall within the next two weeks could improve soil moisture, it will slow the planting activity. However, this is not much of a concern, there is enough time for farmers to plant. The optimal soybean planting window only closes at the beginning of December.

In global markets – The weather remains a primary focus in the US soybean market as it could influence the harvest processes. The forecast for the next eight days shows a possibility of light showers in the north-eastern parts of the Midwest which could potentially slow the maturation and harvest process.

At the beginning of last week, 36% of the US soybean had already been harvested, which is 8-points behind the corresponding period last year. At the same time, about 61% of the crop was rated good/excellent, which is 13-points lower than the same period last year. An update will be released this evening as part of the USDA’s weekly crop progress report.

The forecast rainfall across the country within the next two weeks could improve soil moisture ahead of the planting period which commences at the beginning of November. As previously noted, there are ideas in the market that sunflower seed price competitiveness and good weather could tempt farmers to increase acreage in this upcoming season.

Apart from the aforementioned developments, it is still an off-season period in the domestic sunflower seed market and this week’s calendar is light with no major data releases. Therefore, the market will most likely be driven by the domestic currency movements and traded volumes in the local market.

The South African potato market lost ground in Friday’s trade session with the price down by 4% from the previous day, closing at R47.55 per pocket (10kg). These losses were on the back of large stocks of 920 650 pockets (10kg bag) at the start of the trading session.

Moreover, during the session, the market saw an uptick in deliveries due to ongoing harvest process. This led to a 7% increase in daily stocks to 986 753 pockets (10kg bag).

The fruit market ended the day mixed during Friday’s trade session. The prices of apples and oranges were up by 2% and 57% from the previous day, closing at R7.54 per and R5.92 per kilogram, respectively. These gains were due to relatively lower stocks of 135 755 tonnes of apples and 64 694 tonnes of oranges.

Meanwhile, the bananas market lost 5% from the previous day, closing at R6.44 per kilogram due to the relatively large stock of 217 720 tonnes. Moreover, strong commercial selling also added pressure to the market.

Read more
Do NOT follow this link or you will be banned from the site!
Linton