The next two weeks promises a chance of good rainfall 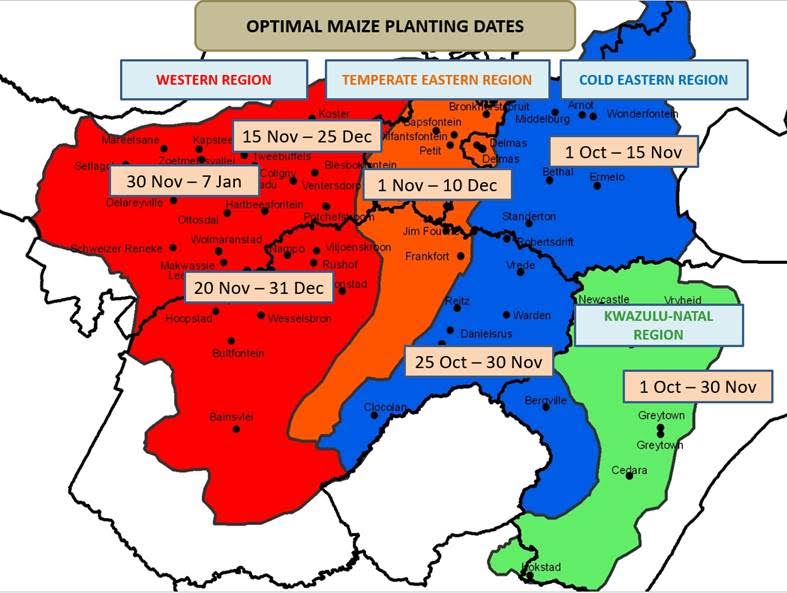 The optimal planting window is narrowing in the eastern parts of the South African maize-belt. However, the planting process is not yet complete is some areas due to interruptions caused by drier conditions at the beginning of this month. The only province that has made notable progress is Mpumalanga, with roughly 90% of the intended hectares already planted.

With that said, the expected rainfall within the next two weeks should improve soil moisture, albeit delaying the planting activity. Overall, there is still enough time for planting in the western parts of the maize-belt, where the optimal planting window only closes in mid-December.

From a trade perspective, South Africa’s maize exports recovered from the disappointing activity observed in the week ending 03 November 2017. Last week, the country exported 58 538 tonnes of maize. About 87% of these exports were yellow maize, with 13% being white maize.

Yesterday, parts of the Western Cape province received rainfall of between 15 and 20 millimetres. More showers are expected within the next eight days. This should improve dam levels which are critically low – estimated at 35% on 13 November 2017, which is 23% lower than the corresponding period last year.

Although this is a welcome development, it might delay the harvest process which is currently in full swing across the province. At the moment, it is unclear whether the rainfall will have an impact on the crop quality. The quality of the crop that has already been harvested is reportedly in a fair condition.

Although a net importer of wheat, South Africa continues to export wheat to regional markets. The sixth batch of exports this season went to Namibia, totalling 34 tonnes. This placed total exports for 2017/18 marketing season at 1 648 tonnes. There’s likely to be more exports to regional markets over the coming months.

The weather remains a primary focus in the local market. The current forecasts show that the next two weeks could bring widespread showers across the soybean producing areas of the country. This will improve soil moisture, and later benefit the new season crop.

The planting activity is still at initial stages across many provinces. The process has been somewhat slow due to dryness in some parts of the country. The province that has advanced is Kwa Zulu Natal where roughly 40% of the intended area had already been planted at the beginning of the week.

In global markets – The global soybean demand remains fairly vibrant. The USDA recently reported a sale of 135 000 tonnes of US soybean meal to the Philippines. Egypt is looking for 30 000 tonnes of soybean oil from the world market.

Although last week’s expected rainfall did not materialise, the forecast for the next two weeks is promising with a chance of between 16 and 30 millimetres across sunflower seed producing regions. This should improve soil moisture and benefit the crops, albeit delaying the harvest activity.

As indicated in our previous notes, South African farmers intend to increase sunflower seed plantings by 5% from the 2016/17 production season to 665 500 hectares. The expansion will most likely be in the North West and Free State provinces and could be at the expense of white maize hectares due to price competitiveness

In the global market – The harvest process virtually over in the US. On 12 November 2017, about 81% of the crop had already been harvested. This is 7-points behind the corresponding period last year. The delays are largely due to wet weather conditions in some parts of the Midwest in the past few weeks.

Yesterday the South African potato market managed to claw back its recent losses. The price was up by 7% from the previous day, closing at R35.91 per pocket (10kg). These gains were mainly on the back of lower stocks of 871 104 pockets (10kg bag) at the start of the trading session.

However, during the session, the market saw an uptick in deliveries as harvest activity picks up after a quiet weekend. This subsequently led to a 13% increase in daily stocks to 982 635 pockets (10kg bag).

The fruit market was once again mixed in yesterday’s trade session. The oranges market withdrew some of its recent gains following a substantial increase in daily stocks to 111 000 tonnes (double the previous day’s level). The price was down by 41% from the previous day, closing at R5.55 per kilogram.