Farmers: Focus on what you can change

South Africa’s combine harvester sales continue to show strong growth ahead of a bumper crop this season. Recent agricultural machinery sales data showed that in March 2017, combine harvester sales were up by 21% from the previous month and 64% from the corresponding period last year — with 23 units sold. Worth noting is that the sales have been on the upward trend since the beginning of the year and March was the highest.

Meanwhile, the tractor sales declined by 24% from the previous months, with 515 units sold. With that said, this is 19% higher than the corresponding period last year, ahead of the winter crop planting season, which is set to commence over the next few weeks.

Overall, the optimism in the agricultural machinery market could be short-lived, as the weakening Rand against the US dollar could increase costs of the equipment. In addition, escalating farm debt could also reduce some farmers’ ability to further invest in machinery. In 2015 the total real farm debt was at R142 billion, which is a record level in a database starting from 1980. 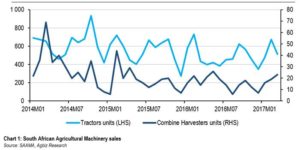