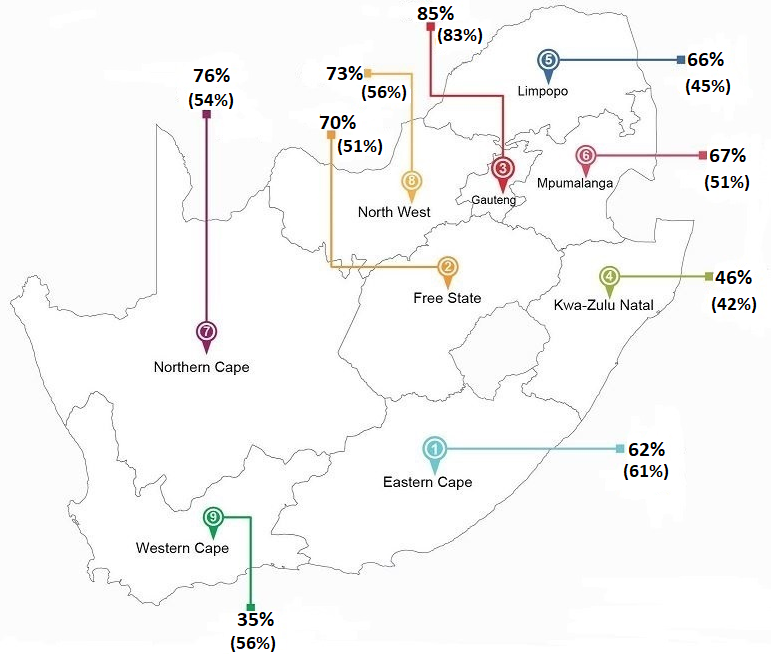 The warm weather conditions in the Western Cape province have allowed for good progress in winter wheat harvest activity. In the Swartland region, roughly 90% of the crop has already been harvested. In the Southern Cape, the harvest process is virtually over, with the exception of Mossel Bay, where almost half of the crop has not yet been harvested.

In Overberg region, roughly 70% of the crop has already been harvested. Overall, the yields are below average, which is not surprising given the unfavourable weather conditions experienced during the production season. With that said, the quality is reportedly in a fair condition.

Looking ahead, the expected warm and dry weather conditions this week should support the harvest process in areas that not yet completed. With that said, dryness implies that the dam levels could remain in bad shape for some time. The update for the week ending 20 November 2017 shows that Western Cape dams averaged 35%, unchanged from the previous week, but 21% lower than the same period last year.

Elsewhere, the winter wheat harvest process is virtually over in the irrigation areas of Limpopo and the yields vary between ‘average to below-average’. In the Northern Cape province, also irrigation, the harvest process should begin in few weeks’ time. The crop is reportedly in good shape and there are expectations of good yields. Overall, the National Crop Estimate Committee forecasts South Africa’s 2017 total wheat production at 1.66 million tonnes. An update will be released tomorrow, 28th of November 2017.

Maize farmers have made notable progress regarding the planting process of the new season crop. In Mpumalanga and Kwa-Zulu Natal provinces, the process is almost complete. With the optimal maize planting window already passed in the eastern parts of the maize-belt, the late plantings stand a risk of experiencing frost later in the season, thus increased the possibility of harvesting relatively lower yields.

Looking ahead, the expected rainfall within the next two weeks should replenish soil moisture, which will support the new season crop in areas that have already planted, and planting process in the western parts of the country which have been on the downtime due to dryness. The western regions of the maize-belt have sufficient time to plant as the optimal window only closes in December.

In terms of supplies, South Africa’s maize stocks were estimated at 9.2 million tonnes in October 2017, which is twice the volume seen in the same period last year due to large supplies on the back of a record crop in 2016/17.

With the exception of Kwa-Zulu Natal province, the soybean planting process is still at initial stages across the country. The delays in planting in other provinces are due to drier weather conditions experienced in the past few weeks.

However, this could soon change as the weather forecasts show a possibility of good showers within the next two weeks. The long-term forecasts from the South African Weather Service also suggest that the summer crop growing areas of the country could receive above normal rainfall between November 2017 and February 2018.

The South African potato market gained ground in Friday’s trade session with the price up by 4% from the previous day, closing at R42.23 per pocket (10kg). These gains were mainly due to lower stocks of 848 606 pockets (10kg bag) at the beginning of the session.

Moreover, during the session, the market saw strong commercial buying interest, coupled with a marginal decline in deliveries on the back of slow harvest activity. This led to a 4% decrease in daily stocks to 813 033 pockets (10kg bag).

The fruit market saw widespread losses in Friday’s trade session. The apples and bananas prices were each down by 2% from the previous day, closing at R7.67 and R6.41 per kilogram, respectively. These losses were partially due to relatively large stocks of 172 000 tonnes of apples and 197 000 tonnes of bananas.

The price of oranges declined by 6% from the previous day, closing at R5.96 per kilogram owing to increase commercial selling. However, this could be short-lived owing to lower stocks of 18 000 tonnes at the end of Friday’s trade session.

The data from the Red Meat Levy Admin shows that farmers slaughtered 209 322 head of cattle in September 2017, down by 12% from the previous month, and the corresponding period last year. Overall, this implies that the uptick in August 2017 slaughtering activity was somewhat a temporary blip. We will get more clarity on October 2017 slaughtering figures, which are due for release later this week.