To everyone who takes a bit of time to read what we write, thank you. Best wishes for 2018. 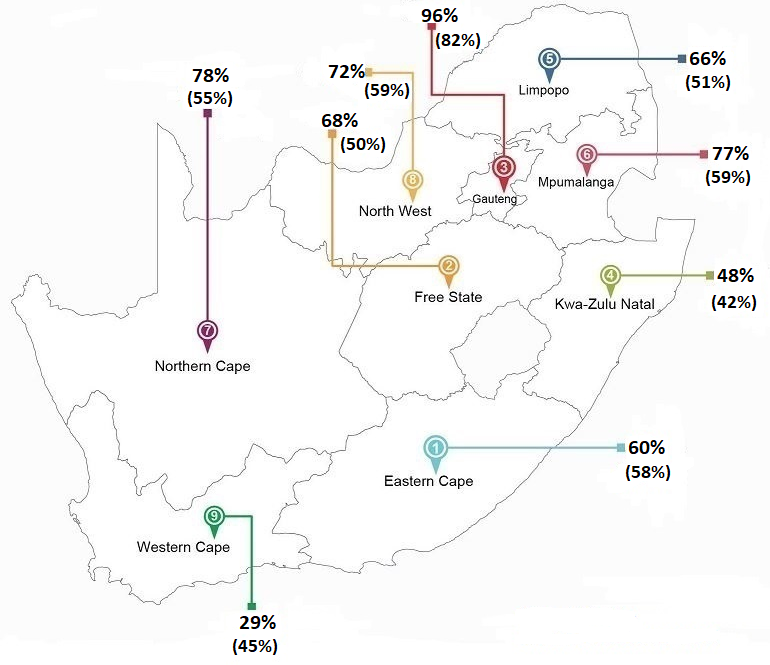 While temperatures could rise to levels above 26 degrees Celsius at the start of this week, there is a possibility of light rainfall in most parts of the country within the next eight days (see figure 1 – attached report). However, this will not be sufficient to significantly improve soil moisture in summer crop producing areas. Meanwhile, the Northern Cape and Western Cape provinces might remain dry and warm over the observed period.

The expectations of rainfall in the latter part of 2017 did not materialise in most areas, particularly the western regions. As result, the maize planting process has not yet been completed in some areas. Moreover, the areas that managed to plant on time are currently experiencing heat stress, but no major damage reported thus far.

Farmers planned to plant 2.47 million hectares of maize this season, which is 6% lower than the 2016/17 production season. About 56% of the area is set to be for white maize, with 44% for yellow maize. However, this might change due to the aforementioned delays in planting in the western regions of the country. Overall, there will be more clarity when the National Crop Estimate Committee releases its estimates on 30 January 2018.

South Africa’s maize supplies are still solid. SAGIS recently reported that the country’s maize stocks were at 8.2 million tonnes in November 2017, which is twice the volume seen in the same period in 2016. This notable uptick is mainly due to a record commercial maize production of 16.74 million tonnes in the 2016/17 season.

From a trade perspective, South Africa exported 64 206 tonnes of maize in the weeks of 09 to 29 December 2017. The leading buyer was Japan with a share of 56%, all yellow maize. This placed South Africa’s 2017/18 total maize export volume at 1.7 million tonnes, which equates to 77% of the season’s export forecast of 2.2 million tonnes.

In December 2017, the National Crop Estimate Committee revised its 2017 wheat production estimates down by 7% from the previous month to 1.48 million tonnes. This is 23% lower than the previous season’s crop. The downward revision was mainly due to disappointing yields in the Western Cape and Free State provinces, on the back of unfavourable weather conditions. The sixth production estimates for 2017 wheat will be released on 30 January 2018.

Overall, this implies that South Africa will have to import at least 1.80 million tonnes of wheat in the 2017/18 marketing year in order to fulfil the domestic needs. This is almost double the previous marketing year’s imports of 934 765 tonnes.

The expectations of heavy rainfall in the summer crop growing areas of South Africa did not materialise in most areas during the festive season, particularly the western parts of the country. As a result, the sunflower seed planting process has somewhat been delayed, and the areas that have planted continue to experienced heat stress which could possibly damage the crops.

The South African farmers intended to plant 665 500 hectares of sunflower seed in the 2017/18 production season, up by 5% from the previous season. Given the aforementioned realities, this target is unlikely to be achieved. The National Crop Estimate Committee will release the preliminary area planted estimates on the 30th of January 2018.

Aside from this, the country still has large supplies from the 2016/17 production season. South Africa’s sunflower seed ending stocks were recorded at 374 117 tonnes in November 2017, down by 20% from the previous month, but up by 32% from the corresponding period last year.

In terms of trade, South Africa exported 42 tonnes of sunflower seed to Namibia in November 2017, which is well above the previous month’s exports of a mere one tonne. This brought the country’s 2017/18 sunflower seed exports to 168 tonnes – all went to regional markets, namely; Botswana, Namibia and Swaziland.

Also worth noting is that sunflower seed consumption (crushed oil and cake) declined by 3% month-on-month to 92 650 tonnes in November 2017. However, this is 59% higher than the volume utilised in November 2016.

Unlike other crops, such as maize and sunflower seed, most soybean growing areas of the country managed to plant on time, with the exception of few areas in the western parts of the country which experienced delays due to dryness. The expected rainfall at the end of 2017 did not materialise in some regions, particularly the western areas, where soil moisture is still low.

The South African farmers planned to plant an area of 720 000 hectares in the 2017/18 production season. However, the current warm weather conditions could hamper this target. That said, there will be more clarity when the National Crop Estimate Committee releases its preliminary area planted data at the end of this month.

From a trade perspective, the large soybean harvest of 1.32 million tonnes received in 2016/17 production season implies that South Africa could receive minimal imports in the 2017/18 marketing year. This is a remarkable improvement following imports of 271 098 tonnes in the previous marketing year.

After a positive start this year, the South African potatoes price came under pressure in Friday’s trade session, down by 2% from the previous day, closing at R42.65 per pocket (10kg). These losses were mainly underpinned by large stocks of 776 791 pockets (10kg bag) at the beginning of the trading session.

In addition, during the session, the market saw an uptick in deliveries as harvest activity picks up after a quiet period during the Christmas holidays. This led to a 6% increase in daily stocks to 824 387 pockets (10kg bag).

After a wobbly performance in the latter part of 2017, the fruit market started the year again on a mixed footing driven by relatively lower stocks. The prices of bananas and oranges were up by 9% and 13% from the previous day, closing at R6.78 per kilogram and R7.04 per kilogram, respectively. This was partially due to lower stocks of 289 320 tonnes of bananas and 21 088 tonnes of oranges.

Meanwhile, the price of apples was down by 2% from the previous day, closing at R8.68 per kilogram. This followed an uptick in daily stocks to 135 710 tonnes.

The SAFEX beef carcass market started the year on a quiet footing with the price flat at R44.00 per kilogram.  However, this could differ from the physical market which continues to show solid activity and volumes.

In October 2017, South African farmers slaughtered 219 393 head of cattle, up by 3% from the previous month, but 7% lower compared to October 2016. The Red Meat Levy Admin will release an update of the cattle slaughtering data later this month, and that will probably show an uptick due to strong festive season demand.