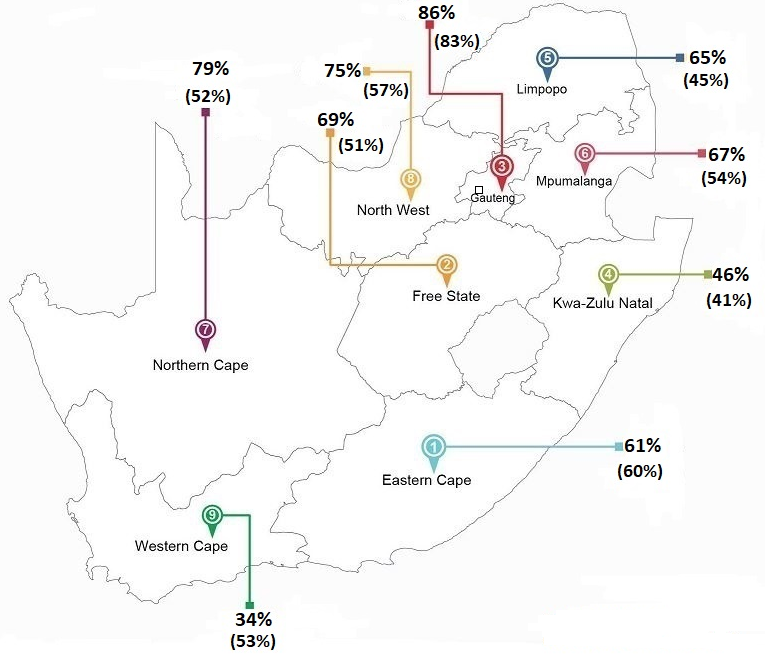 The winter wheat harvest process is complete in the Western Cape province. The yields were generally below average, which is unsurprising given that the drier weather conditions experienced during the production season. The National Crop Estimate Committee forecasts the province’s wheat harvest at 684 600 tonnes, which equates to 43% of the national crop forecast of 1.58 million tonnes.

In other major wheat producing provinces, Northern Cape and Free State, the harvest process is underway with yields expected to vary between average and above-average. Thanks to good water levels in the dams that supported the irrigation areas.

As indicated in our previous notes, the picture in the Free State province is somewhat mixed, with wheat yields varying between average and below-average. The better yields were mainly supported by irrigation. Overall, Free State and Northern Cape provinces are expected to produce a combined share of 38% of South Africa’s wheat crop this season.

In the next few months, the weather will be of less importance in the Western Cape province from a winter crop production perspective. However, the expected drier conditions within the next two weeks will negatively affect households and other farm sub-sectors, which as livestock and horticulture, amongst others.

More specifically, dryness implies that there would be minimal improvement in water levels in the dams, which are critically low. The update for the week ending 04 December 2017 shows that Western Cape dams averaged 34%, down by 1% from the previous week, 19% from the corresponding period last year.

The optimal maize planting window in the western regions of South Africa is closing this week. However, the planting process is not yet complete in most areas due to interruptions caused by drier conditions in the past few months. The only areas that have made notable progress in planting thus far are the eastern regions of the country, such as Mpumalanga and Kwa-Zulu Natal provinces.

With that said, the maize planting process will most likely continue over the next few weeks if the expected rainfall materialises. The main risk of planting beyond the optimal window is frost later in the season, which might ultimately lead to relatively lower yields.

With that said, the short and medium term weather outlook are positive with a good chance of above-normal rainfall across the maize belt. As we set out in our note on 08 December 2017, a report from the Australian Bureau of Meteorology has confirmed a development of La Niña in the 2017/18 summer period. This means that South Africa could receive above normal rainfall this season, which bodes well for the maize crop.

The soybean optimal planting window is narrowing across the country, but the planting process is not yet complete is some areas due to interruptions caused by drier conditions in the past few months.

The other provinces could make notable progress if the expected rainfall within the next two weeks materialises. Looking ahead, the long-term weather forecasts paint a promising picture of above-normal rainfall between December 2017 and February 2018.

Overall, the data calendar for this week is light, therefore, the domestic soybean seed price movements will largely be driven by developments in the currency market, and in Chicago soybean market.

On Friday, the South African potato market lost ground with the price down by 4% from the previous day, closing at R46.83 per pocket (10kg). These losses were mainly on the back of large stocks of 902 263 pockets (10kg bag) at the beginning of the session.

During the day the market saw an uptick in deliveries owing to ongoing harvest process. This subsequently led to a 2% increase in daily stocks to 919 940 pockets (10kg bag).

Meanwhile, the oranges market maintained the previous day’s gains with the price up by 30% from the previous day, closing at R7.77 per kilogram. These losses followed a 24% decline in daily stocks to 48 000 tonnes.

The data from the Red Meat Levy Admin shows that farmers slaughtered 219 393 head of cattle in October 2017, up by 3% from the previous month, but still 7% lower than the corresponding period last year. November and December 2017 data could show an uptick in slaughtering due to strong festive season demand for meat.